As you might have guessed reading some of my older posts, I like to automate things which I believe a computer should do in place of humans.

It is true for “Automating my development machine installation“ or deploying software in “Build, ship and run ASP.NET Core on Microsoft Azure using Docker Cloud“… Today I will show you how to publish Visual Studio extensions using Azure DevOps.

I am the author of Git Diff Margin, a Visual Studio extension displaying live Git changes of the currently edited file on Visual Studio margin and scroll bar. It supports Visual Studio 2012 through Visual Studio 2019 Preview. You can watch a short video about some of its features at the end of this blog post.

There is clearly lots of place for some automation.

For some time, I have used AppVeyor to at least have a Continuous Integration build. This was helping already to be sure that a Pull Request would build correctly and to get the vsix artifact built somewhere else than on my developer machine.

A good step for sure, but not enough to please me.

I have greatly reduced the burden using Azure DevOps 💕 and this at no cost!
Microsoft is supporting the open source community with Azure Pipelines with 10 parallel jobs with unlimited minutes for CI/CD! Thanks for that.

So, creating a build pipeline on Azure DevOps is the first step and it is super easy! It comes in two flavors; one with a visual editor and one as a YAML file.

The overall goal of the build pipeline is to

You can see that we already automated a good part of the manual tasks that we had to do previously. In fact, now we still need to update the version manually but only in one place which is the Azure DevOps YAML file: azure-pipelines.yml.

The remaining manual tasks are

This is the azure-pipelines.yml file which automates the whole build step!

By the way, you can get nice clickable build status badge like the following one

Now that we have access to the build artifacts; GitDiffMargin.vsix for the Visual Studio Marketplace and GitDiffMargin.nupkg for Chocolatey we can automate the next step through a Azure DevOps release pipeline.

In this step, we would like to automate the following

For that, we created a release pipeline job named “Marketplace - Github - Choco” with 3 tasks connected to our previously defined build pipeline artifacts 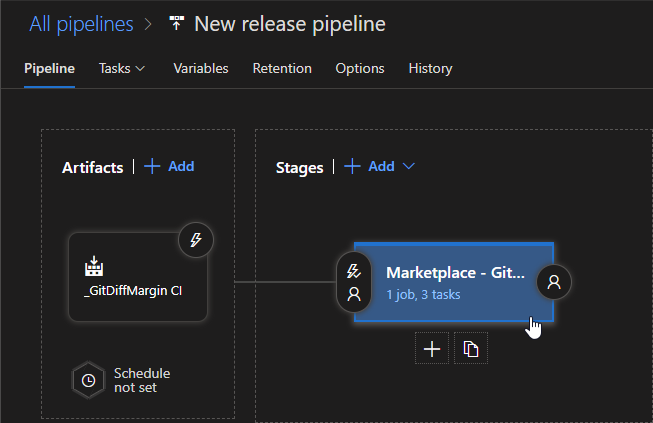 And if everything worked correctly you see the following result 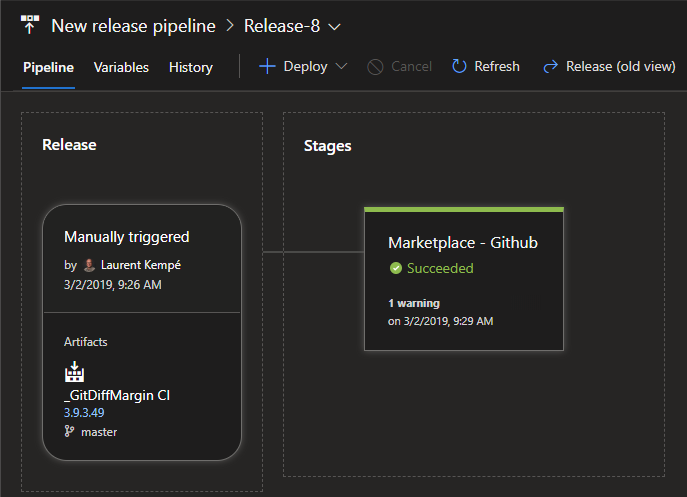 And now people have access to the latest version of Git Diff Margin on Visual Studio Marketplace, on Github release and on Chocolatey.

Finally, we achieved our goal and let the machines do the work, which saves us time and avoid some mistakes. 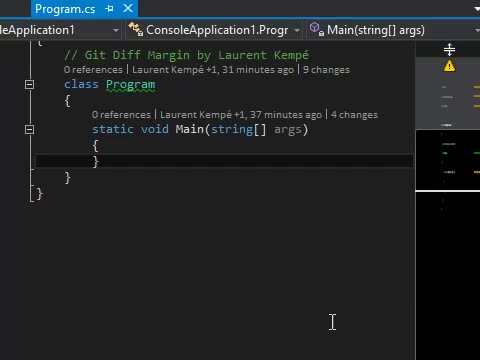