You can read more about it on the dotnet / coreclr github repository. You can also see the progress of the .NET Core team on that particular topic on the Unloadability Github project page.

Here are some of the scenarios that motivated this work:

In our case, the idea of this tiny project is the following:

We will start with a simple hello world application, what else 😉 and we will allow the main application to pass some arguments to the dynamically compiled assembly.

First, we are using some Rx code to observe the file, I won’t go into that detail because it is not the purpose of that post. The code is coming from Wes Higbee from the repository g0t4/Rx-FileSystemWatcher.

We are using Rx-FileSystemWatcher to observe the Sources folder and filter for DynamicProgram.cs. When this file is changed, we trigger the build, load the assembly generated, find the entry point and invoke it passing “France” as the first parameter.

The main program delegates the compilation to the Compiler class, which is using Roslyn to compile the C# file DynamicProgram.cs. If there are some compilation errors, those are displayed on the console output. Otherwise, the compilation result is a Hello.dll returned as a byte array.

Then, the main program delegate to the Runner class which is in charge of loading and executing the entry point of the just compiled new assembly.
We are marking the method LoadAndExecute with [MethodImpl(MethodImplOptions.NoInlining)] so that the method cannot be inlined and to ensure that nothing would be kept alive.

In fact, the unloading does not happen immediately, it will wait that the GC collect the assembly. This is why we are calling GC.Collect() and GC.WaitForPendingFinalizers() in the Execute method. This is not mandatory but in our case, we want to be sure that the previous assembly is unloaded before compiling and loading the new one.

Let’s run the application, change the file Program.cs in the folder Sources and see it working 😎 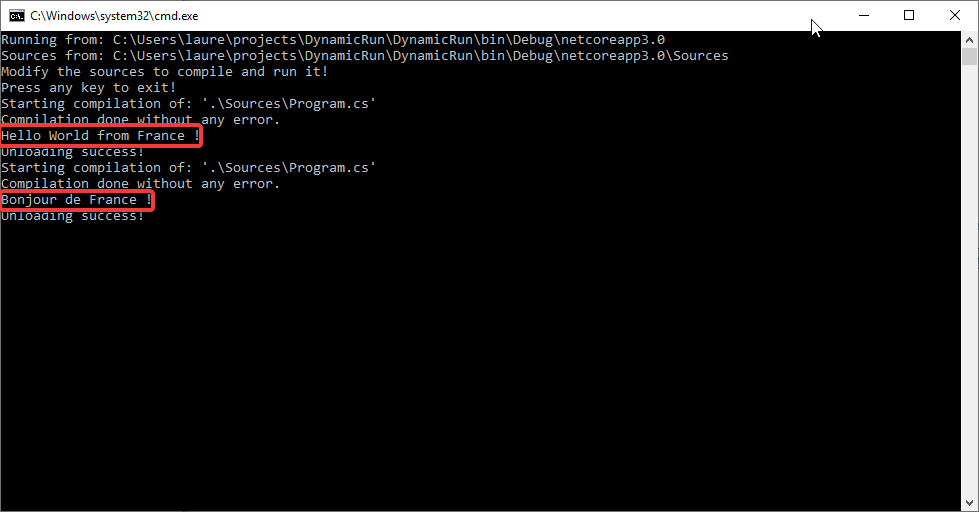 This is opening some new capabilities which we might explore in some new posts!

You can access to the whole project on Github, laurentkempe/DynamicRun.

Finally, you can read even more about it on “Using and debugging unloadability in .NET Core“ and can also have a look at this interesting project natemcmaster/DotNetCorePlugins which starts to talk about the same topic on “Make plugins unloadable“.